Posted at 11:09h in Uncategorized by Mentor Africa Foundation 0 Comments
1 Like
Share
The not-so-proverbial 1 percent of the world roughly controls 44.8 percent of the world’s wealth according to an Oxfam report which places half of the world’s wealth in the hands of 26 billionaires.
But how do they do it?  The truly wealthy, how are they able to amass such wealth?
We might not be able to give you a downloadable e-book on ‘how to get rich quick’ but we can tell you 7 bad habits the truly wealthy never have.

After interviewing over 400 experts, with about 90 percent of them being in the 1 percent, 3-time best-selling author,  Andrew Ferebee provided a listicle detailing 7 things these truly wealthy people had in common. Although these are not universal laws every wealthy person abides by, they are pretty important to learn.

1. Truly Wealthy People Do Not Watch TV for More an Hour Daily

If you threw a stone in a crowded room you would hit and probably offend at least three people, two of whom would have probably seen all episodes of the hit TV show ‘Friends’. Twice.
What might interest you to know is that on average, we spend three thousand and thirty (3030) days watching TV in our lifetime, which is eight years.
This is seven years six months more than it takes to learn a new skill.
While it is not advisable to spend all of your time being productive, it is also point-blank irresponsible to constantly spend the bulk of your waking moments helping Professor and the gang of ‘Money Heist’ move €2.4 billion.
Here are a few ways you can control how much TV you watch.

2. They are not Daily Drinkers

In 2019, founder of one of the world’s biggest e-commerce companies threw a lavish 55th birthday party for over sixty thousand (60,000) employees that had most of us thinking “God, when?’, proving again one thing we all know: wealthy people know how to party hard!
While this is true, truly wealthy people also know how and when to indulge in the little pleasures of life including but not limited to alcohol consumption.
A good amount of the truly wealthy simply do not drink daily and especially not excessively. So if you want to be a part of the crème de la crème, you may need to step further away from the bottle.

3. They Do Not Spend the Bulk of Their Money on Consumption, Instead, They Spend on Creation

While Mark Zuckerberg might not be the most luxury driven billionaire, he does own a few things of value.
These include a luxury estate worth about $7 million, a fancy sports car and even a yacht.
However, none of these costs as much as his most recently acquired project, Giphy, for a jaw-dropping $400 million. Wealthy people are not in the habit of spending more on consumption as there are on things that grow them even more wealth.
Successful people spend money intentionally and focus most of their income on things that assist in creation. 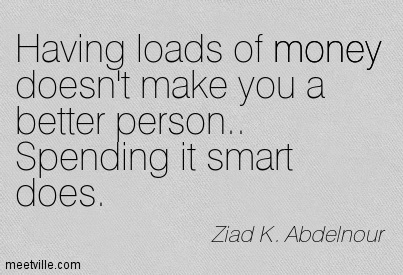 Your body is your temple and how you treat it is very important. Successful people do not constantly overeat or continuously ingest garbage. They take good care of their body and mind.
A habit we could all use irrespective of whether we intend to build wealth.
You might be interested in reading a previous post on ours on why your health is the key to success.

5. They Don’t Blame Other People for Their Failures

Passing the blame is a game a lot of us play too well.
We always have something or someone to blame for our failures and sometimes spend valuable time obsessing over who did or didn’t do what.
You will rarely meet successful people who are in the habit of blaming others for their misfortune.
If you truly want to be amongst the truly wealthy, you need to stop playing the blame game and own up to your failures.
It’s already happened. Own your mistakes, figure out how or what you could have done better and try again. You have so much more power than you give yourself credit for.

6. They Don’t Waste Time Talking About Other People

Now, we could be wrong but we don’t believe Bill Gates spends most of his free time engaging his fellow billionaires about some valueless thing someone else did while they drink margaritas and laugh.
Successful people do not spend their time in petty gossip.
Sure, they may mention an ill or mistake a former friend/colleague/associate did but you may never hear them say;
“OMG last night did you see what Felicia said to Mohammed Salah?”
“Did you hear that future has a 7th baby mama?”
“Did you know that R Kelly and Usher are dating the same girl?”
They don’t do that and you shouldn’t either.

7. They Don’t Spend Time Worrying About What People Would Say

Successful people are the most focused set of people in the world, and the most common trait they share is that they are doers.
Not thinkers, not worriers. Doers!
They set their mind at a goal and they don’t worry about what people would say about their decision. They just do it. At most, they take advice from people who have already charted their course and learn from their teachings.
They care about their investors, shareholders, their mentors. The people whose opinions matter. You might not have investors and shareholders yet but you can find mentors here.